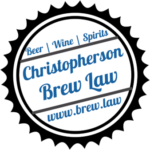 Where Breweries Go For Legal Answers

The beer business is a highly regulated industry.

To succeed, your brewery will have to comply with countless federal, state, county, and city rules and regulations, while also navigating thorny legal issues like trademarks, lease negotiations, investor and loan agreements, and more.

One option is to spend hundreds of (likely frustrating) hours stumbling your way through the maze that is federal and state compliance. Or you could choose spend your time doing what you are good at, and what you love – BREWING GREAT BEER. So, here is my suggestion to you:

YOU MAKE THE BEER. I’LL HANDLE THE LAW.

Full disclosure, I’ve made beer before and it wasn’t particularly good. What I am good at, and passionate about, is being a beer lawyer. Just ask my clients.

How I can help:

I love working with breweries and being a small part of their success. I’ve helped dozens of breweries go from the planning stage to opening, and from opening to expansion. I’d love to be part of your team, and do what I can to save you time, money, and stress as you continue making and serving great beer.

Building on his passion for craft beer, Dan started working with breweries in 2012.  Since that time, he has worked almost exclusively in the alcoholic beverage industry, helping both small and large breweries with licensing, compliance, and other needs as they grew from founding to expansion and beyond.

Dan has assisted hundreds of alcohol beverage companies (as well as several restaurants, bars, and food and non-alcoholic beverage companies) to develop and defend their trademark rights, both in the United States and internationally. Dan has extensive expertise in guiding breweries and other companies through the process of trademarking the names of their breweries, beers, and other intellectual property, including successfully appealing denials of trademark registration before the U.S. Patent and Trademark Office (USPTO).  Dan also has extensive experience crafting settlements between parties to resolve trademark disputes or defending clients in litigation over trademark applications or registrations.

Although based near Denver, CO (and previously near Washington, DC), Dan works with breweries and other alcohol beverage producers and brand owners throughout the country and the world. Dan helped form the Loudoun County Brewer’s Association in Northern Virginia and has served in an advisory role for the organization ever since.

Dan graduated from the University of Denver Sturm College of Law in 2007. While there, Dan focused his studies on intellectual property law and interned for the trademark division of the USPTO and the United States Copyright Office. Dan is barred in Colorado and Washington, D.C., and is a registered Patent Attorney. A Michigan native, Dan graduated from Michigan State University in 2004, where he studied Philosophy.