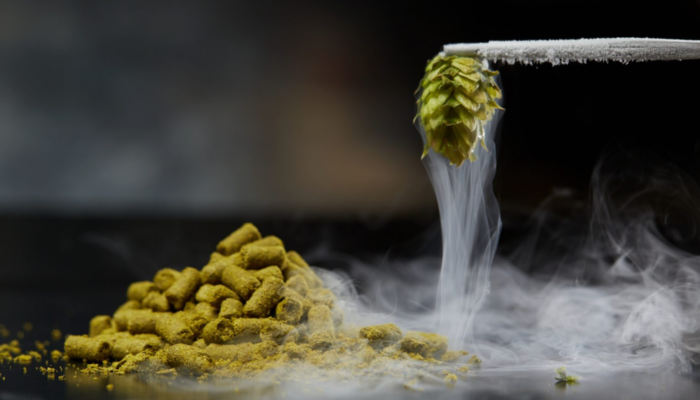 Tips for Brewing With Cryo Hops – A Concentrated Lupulin Boost

Brewers are always searching for new ways to push the brewing envelope and to maximize the flavor potential of their ingredients. Hop farmers and suppliers work hard to match that level of experimentation with creative new products. Cryo Hops remain an exciting yet efficient way of having it all for brewers.

Whether called Cryo, Lupulin Pellet (Hopsteiner), or LUPOMAX (Haas), these pellets are a concentrated form of lupulin, the tiny yellow golden hued glands inside a hop cone. To maximize the intensity of flavors and aromas, the producers separate lupulin from the hop’s green vegetal matter. “A Cryo Hop is the pure extracted lupulin gland of the hop cone,” says Brandon Ross, Specialty Brand Manager for Hop Valley Brewing in Eugene, Oregon. “Think of lupulin as the pollen of the hop, which contains all of the compounds and oils that give hops the flavor and aroma characteristics that we love.”

The process boosts the flavor and aroma potential of the hop but in a much more concentrated and effective form, capturing all of the alpha acids and essential oils usually experienced in a T90 pellet with less potential for off-flavors. “Brewing with Cryo Hops greatly enhances hop flavor and aroma, without the leafy grassiness and astringency from the hop cone’s plant material,” says Ross. “When using a full hop cone, brewers have to battle how to add hops in order to get the flavors they’re looking for, while trying to avoid any off flavors that can also come from the hop’s leaf and stem. Cryo Hops separate the good compounds we are looking for, and remove the ones we want to avoid.”

With nearly twice the resin content of traditional hop pellets, these concentrated hop products also assist in creating additional yield in the brewhouse and cellar through reduced trub, resulting in cost savings and net increases in revenue per batch. ”When making a heavily hopped beer, you expect a certain amount of loss due to the fact that the plant material from the hops soaks up liquid like a sponge, and when you pull the hops, you lose that liquid,” says Ross. “With Cryo Hops, there is no plant material, so we retain that volume in our final yield.”

Use them in traditionally hoppy beers but also try other styles. “Any beer where you want to showcase hop flavor and aroma in a big way,” Ross advises. “Pale ales and IPAs definitely stand out here, but they could also be very interesting in a wide variety of other styles. That’s the fun in brewing and drinking beer, the experimenting.”