» Production » Beyond Beer » Mitch Ermatinger on Natural Wine – Is It a Fit For Your Brewery? 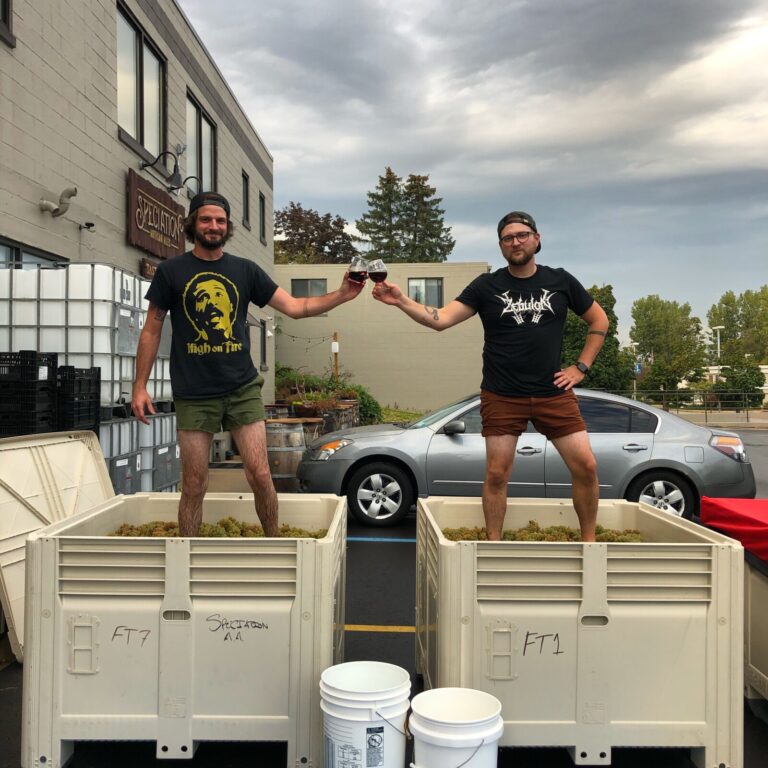 Mitch Ermatinger on Natural Wine – Is It a Fit For Your Brewery?

To hear wine folks tell it, craft beer and natural wine are kindred spirits. Both are quirky offshoots of the traditional beverage order, expand the flavor ranges beyond the ordinary, and remain a little difficult to define. In pushing beverage alcohol to new frontiers and places, there is an interplay between craft beer and natural wine, especially as beer increasingly mimics the flavors, aromas, and aesthetic of wine through barrel and wood aging, fruit and mixed culture fermentation, and other techniques.

Mitch Ermatinger fundamentally understands all of this. After more than a decade running Speciation Artisan Ales in Grand Rapids, Michigan, Ermatinger decided to venture into wine with his Native Species Natural Winery. He has some words of advice for brewers considering a move into natural wine.

Why Wine And What Is Natural Wine?

“For us, it was just kind of another avenue to create fermented beverages,” Ermatinger says. “We made pretty much exclusively wild fermented saisons and sour beers for a few years. And it was fun, but we were also kind of just looking for something else to do.” After he and other members of the staff started getting into natural wine in 2018, he looked around and realized that he had all the resources necessary to make wine. “We use all wine equipment in our brewery and we also live in a great grape growing region in Michigan, so we were kind of just like, we have all the resources we need to just make wine, so why don’t we just do it? And that was it,” he says. “There was no real plan other than let’s buy some locally grown grapes and crush them and see what happens.”

If you think craft beer is a difficult term to define, wait until you hear about natural wine. When asked about defining natural wine, Ermatinger laughs and notes “that’s a challenging question.” He compares natural wine to sour beer. “Ask 10 different brewers and you’ll get 10 different answers,” he laughs. “Natural wine is a lot of things to a lot of different people. Some people say it has to be organic, biodynamic, or harvested with the phases of the moon, all that stuff. And if it’s not, then it’s not natural wine. From my perspective, I think that’s kind of a little extreme. So, for me, a natural wine is just a wine that is native fermented. I don’t care if it’s conventionally grown, or organic or biodynamic. Natural wine for me is wine that is wild fermented with the yeast on the skin, and relatively uncontrolled.”

The Flexibility Of Natural Wine

For all of its definitional differences, natural wine does offer producers some ease in terms of the flavors they deliver. Ermatinger contrasts the aims of natural wine production with traditional wine production. “In general, winemakers are trying to make wines that taste like what people think that grape tastes like,” he says. “You could have 10 different Chardonnays and they could more or less taste identical with very small differences. And they’re all trying to fit this exact same target. They all want it to taste like the idea of Chardonnay. Whereas beer brewing, especially modern brewing in America, we kind of throw rules out the window a lot. In particular, with our brewery being a sour brewery, we really feel that we throw the normal rules and norms out the window. So we kind of approach winemaking the same way.”

Ermatinger and his staff use local hybrid grapes instead of more marquee varietals. These grapes are better suited for survival in the harsh growing conditions of Michigan. They also produce a wider range of flavors that don’t fit in a nicely constructed traditional wine format, including flavors and aromas that are commonly found in sour and spontaneously fermented beers.

Ermatinger highlights the relative ease of starting up a natural wine operation as one reason he entered the space. The process flow of natural wine production largely follows that of his mixed culture brewery, except when they have to drop everything come grape harvest time. And in lieu of a press, the staff crush the locally grown grapes by foot. “I didn’t want to buy a bunch of equipment, especially at the beginning, because I didn’t know if it was going to be like a real thing or not. It was just kind of an experiment,” he says. His Native Species winery buys only grapes grown in Michigan and wild ferments them.

His best piece of advice for brewers interested in starting a natural wine program is to focus efforts on finding and developing a relationship with a grape grower. This helps you learn about the grape production process and to confirm what methods they use. “It’s not like rocket science or anything, it’s still turning sugar into alcohol,” he says. But putting forth the effort early on can assist you in understanding the direction you’re seeking.

At Speciation, the Native Species brand is doing well and is the second fastest growing segment of the business other than seltzer. The growth is also not local as natural wine attracts a particular and dedicated audience. “Pretty much everybody that’s coming into our taproom to drink our wine, they’re coming from Chicago, Detroit, St. Joseph, and other cities,” Ermatinger says. “A lot of the bigger cities are really embracing it more.”

Offering natural wine in his taproom also allows Ermatinger the chance to broaden his customer base and offer new flavors to try. “People who are into craft beer, they’re looking for new and interesting flavors,” he says. “They’ve kind of run the cycle with beer a few times, specifically IPAs. I’ve seen many, many, especially the hardcore beer collectors and stuff, many of them have gone on to whiskey and spirits, and some have gone on to wine. So I do see a lot of those people starting to embrace other beverages other than just craft beer. So from a brewer perspective, I know many brewers are already drinking natural wine and are interested in it. And that, in my experience usually means that they’re going to end up making it at some point. I see natural wine as in its very infancy and there’s definitely a strong movement. I think hopefully in the next couple of years, that segment will slowly grow.”