Five Fruit Purees That Are Perfect for Fall Beers

The Goldilocks of seasons gives craft brewers an array of fruit beer options.

Seasonal holidays, seasonal foods, and seasonal ingredients all influence seasonal brews. During the winter, we seek out dark, complex brews to compliment longer nights by the fire and succulent holiday feasts. Come spring, we’re worn out by winter’s heavy flavors, and we crave sweeter, lighter beers. Hot summers steer us towards light beers that pair well with watermelon, hot dogs, and long days on the beach.

Fall is the Goldilocks of seasons. Not too hot, not too cold, it’s just right for sipping fruited beer on the front porch or around a crowded table with friends and family. It’s also harvest time for pumpkins, apples, cranberries, black currants, and pomegranates, all ideal for fall-inspired fruit beers. According to the Beer Judge Certification Program, Autumn Seasonal Beers “suggest cool weather and the autumn harvest season, and may include pumpkins, gourds, or other squashes, and associated spices.”

Let’s start our tour of the fruit flavors of fall with the undeniable king of the season. 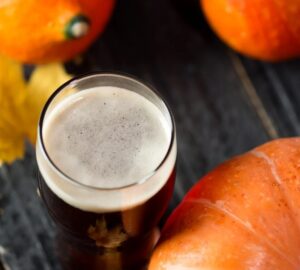 Pumpkin beer is the quintessential American beer of fall.

Pumpkins were one of the most abundant crops in colonial America. They were used in soups, pies, and yes, beers. The popularity of pumpkin beer waned with the arrival of German brewers unfamiliar with the gourd, but in 1985, it was revived by the Buffalo Bill’s Brewery in Hayward, California. Owner Bill Owens was inspired to recreate George Washington’s pumpkin ale recipe, which lives on today as America’s Original Pumpkin Ale. In addition to ales, pumpkins are frequently found in stouts, porters, and even lagers. 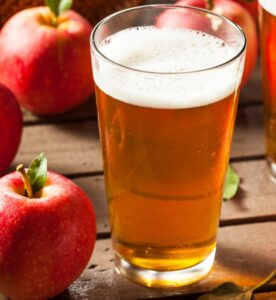 Apples are a close second when it comes to popular fall fruit purees.

If pumpkins are the king of the fall, apples are its queen. From bobbing for apples to caramel apples, this delicious fruit is an icon of sweater weather. Apple puree pairs well with the warming spices like cinnamon and nutmeg that we commonly associate with the season as well as rich, toasty malts. While The Spruce describes cider as “Autumn in a mug,” apple puree can also be used in brewing ales, lagers, and even gose beers.

There can be no doubt that cranberries are an integral part of the fall season. They’re a ubiquitous dish in any traditional Thanksgiving spread, but they don’t have to be relegated to a side dish. Part of the fruit’s popularity is its ability to play well with a diverse array of other flavors – from sweeter berries to seasonal spices like cardamom and cinnamon. Cranberry puree adds zip to wheat beers and packs harvest season flavor into a traditional saison. 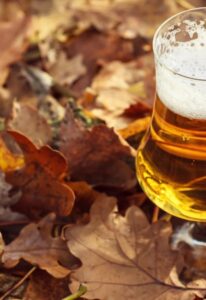 It’s not as familiar as the cranberry, but the black currant pairs perfectly with other fall fruits. It’s a common addition to apple pies, balancing the crisp sweetness of apples with an earthy, jammy flavor. A staple in old German ales, black currants add a rich aroma and jewel tone hues to fruited fall beers as diverse as the sour gose and light-bodied farmhouse ales. It’s also a natural in lambics and any holiday brew.

While pomegranates may not immediately spring to mind when you think of fall flavors, it’s a staple of the season and an ancient symbol of abundance associated with the harvest season. Because it’s often overlooked in favor of more familiar fruit purees like pumpkin and apple, pomegranates present an interesting opportunity gap for brewers who want to mix up the fall palate. The pomegranates’ molasses-rich sweetness and fruity aromatics pair well with other flavors of the season, including pumpkin and ginger. Try pomegranate puree in a seasonal ale, a stout, or a chocolatey porter for a seasonal brew that surprises.

Puree Arete fruit purees are just right for any fall brew.
Purée Areté award-winning fruit purées infuse kettle sours, milkshake IPAs, summer beers, and other seasonal specialties with real fruit flavor. Our rigorous standards ensure that each batch is consistent, and no sugar is added to purees and concentrates for brewers. When you customize your fruit beers with our puree, you’re getting nothing but pure fruit flavor. Each flavor is available in a 5-gallon bag-in-box or 55-gallon drums.

Puree Arete
Looking for that exotic new flavor or a Custom Blend?