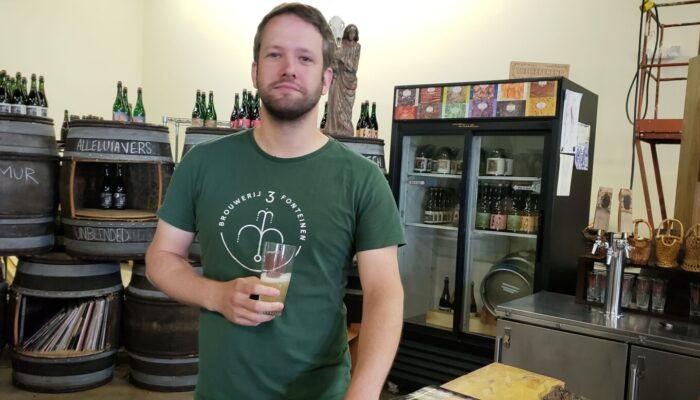 James Priest Talks About Using Honey as an Ingredient

In a world where just about everything is added to beers to increase flavor or bring new delight to a pint, it is fitting that honey, the sweet nectar that mankind has been enjoying for more than 8,000 years, is enjoying a renewed turn in ales and lager.

Honey is showing up in all manner of ways, from flavoring during the boil, to being added during fermentation.

“The way we use it most regularly is as a sugar source for bottle conditioning, as opposed to dextrose,” says James Priest of The Referend in Pennsylvania. “There’s not really a qualitative flavor difference at least early on. Given that honey is more expensive, I don’t think its for everyone.”

There are benefits, however, especially for breweries that want to control the ingredient narrative of their beers.

For Priest, who recently re-located his brewery and blendery from New Jersey to Pennsylvania, having local ingredients from start to finish in all of his spontaneously fermented beers was important.

Local malt has become more available, and the same for hops, and using ambient yeast gives a sense of place for his lambic and gueuze.

“And I was just sitting there for these industrial bags of dextrose made from corn that I didn’t know where it was grown or where it was refined,” he said. “It just felt weird.”

So, when it came to the culminating addition, the ingredient that would assist in bottle conditioning, he decided to switch to honey. He is not alone. As brewers have looked to differentiate their beer or to support the importance of bee colonies they have added regular beers to their rotations.

There is even national recognition for beers featuring honey.

The national honey board has been hosting a honey beer competition for a number of years now, focused on beers that use the sweet nectar at some point in the brewing process. It is a BJCP sanctioned and the 2022 judging was held last month in St. Louis. The competition “featured 12 beer style categories, a cider, hard seltzer and design category. The submitted beers were judged on their aroma, appearance, flavor, mouthfeel and the role honey played in the beer,” according to the group.

Over 240 beers were entered, according to the board, and Liquid Art Brewing’s ‘Honey Sucker Pils’ took home gold this year.

There is still a lot to learn about using honey in beer, especially for fermentation. For Priest, he suspects that there are ambient yeasts living inside of honey that can add additional flavors and complexity to a beer, not just being used as fermentable sugars for existing yeasts.

For the brewers who want to start using honey as a local product, labels are important. There are apiaries that can offer local honey, but Priest says it is important to know what flowers are common to your area.

“If someone near me is offering orange blossom honey, I know it’s not local,” he says.

“It’s just so infinite what we can do with honey,” says Priest.