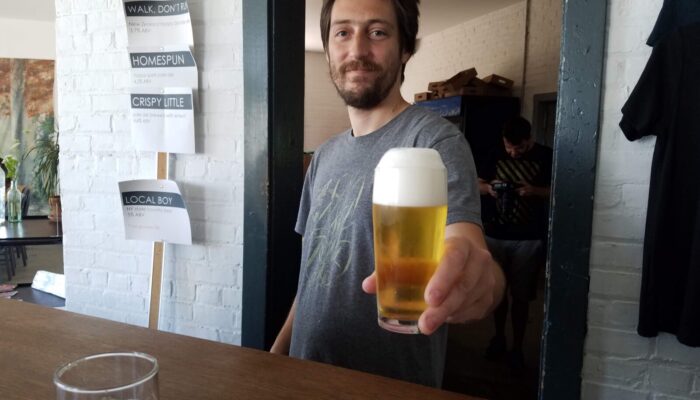 While the act of adding fruit, vegetables, and herbs is nothing new for beer, the pace in which brewers have been tinkering with recipes using those ingredients has certainly increased. There are companies that make it easier than ever to get garden-fresh flavors into beers via powders, purees, and extracts, but for smaller operations or special one-offs, using fresh is still best.

At White Labs, our team is committed to helping foster the science and creativity that propels our industry. We cultivate a community whose boundaries are limitless and we enrich those ambitions by providing our customers with the best possible products and services.

For Dan Suarez of New York’s Suarez Family Brewery this means having a relationship with a few different local farmers who grow the ingredients he needs for his beer. This means regular conversation, asking a lot of questions, and learning the importance of harvest timing and weather impacts.

“We’re lucky enough to be in an area with a lot of small, young organic vegetable farms and a lot of old school fruit orchards that have been around for a long time,” he says of the brewery’s location in the Hudson Valley, north of New York City.

Many of his beers feature herbs and in the beginning he was simply driving around to local farms to see what was being offered which led to the discovery of lemon balm and chamomile that would make its way into recipes.

Eventually he was able to make a connection and consolidate down to one farm as his supplier.

“It just made it so much less work for me,” he said. “I’m talking with one person in January when they are buying seed and can tell them what I need and commit to it. Then we just talk about timing.”

When that farm changed ownership earlier this year he was able to transfer his order to another local farm, owned by a previous brewery employee, for a seamless transition.

By spending time around farmers and having conversations, or simply asking, Suarez says he’s been able to find new herbs for his beer or discover that certain crops – like ginger – grow well in his area, increasing the local nature of his ales and lagers.

When it comes to fruit Suarez notes that timing is everything. Many of the farms in his area are also U-Pick operations aimed at tourists or have contracts with local markets. By staying on top of weather and timing, he’s able to make calls at the right time for the crops he needs for his beers.

“Just like brewing, they want it gone when it’s ready, like when a beer is packaged we want people to drink it,” he says. “So talking with [farmers] in advance or knowing about when something will be ready helps them and helps us plan beers.”

Remember that fruit and herbs are an agricultural product and subject to harvesting changes can help keep scheduled brews adaptable.

“It’s a lot easier when both parties are flexible,” Suarez says. “Nothing is guaranteed for fruit, but I know when to start bothering people,” says Suarez. “And it doesn’t hurt that I bring a few cases of beer for the farmers as well.”

G&D Chillers, Inc.
We Think Outside The Box