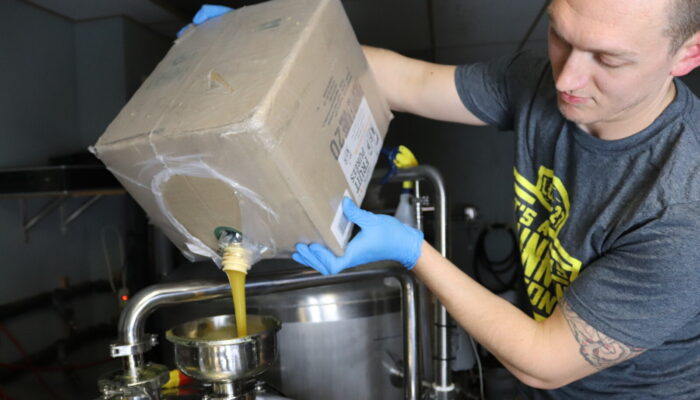 Fruit beers are having a moment. Once subjected to derision among serious beer geeks, often due to the abundance of sickly sweet versions, modern fruit beers often employ a steadier hand and seek to achieve some balance. The days of adding blueberry juice to a bland base beer are in the rear view and the technology fruit infusions employ have substantially improved from the days of having to hand juice fresh fruit.

Nick Burgoyne brewed at Sweetwater Brewing Company in Atlanta, Georgia, for 15 years before becoming a sales specialist for Aseptic Fruit Purees (AFP). During that time, he brewed many fruit beers, using all types of fruits and manners of getting them into the beer, from fresh fruit to concentrates. We asked him to walk us through the best practices for using fruit purees in brewing.

What Are Fruit Purees?

There are several different kinds of fruit purees, including frozen, but we’ll focus on aseptic purees here. With frozen purees, there is some chance that an unwanted organism might still inhibit the product, a concern largely avoided with aseptic purees. With aseptic production, the packers buy fruit from farmers then clean, peel, and blend the fruits together to make a puree, which is then pasteurized and packed into sterile aseptic bags for longer term storage. “A lot of people just don’t want to gamble with that much product and so much could go wrong,” says Burgoyne. “So it’s kind of reassuring people that you’re not going to have any issues with the fruit itself in your process.”

The packages at AFP are available in sizes from 11 pound bags to 440 pound drums and remain vacuum sealed until they are opened. They can last up to 18 months in storage and do not need to be kept cold or frozen. Once the bag is breached, however, AFP recommends using the entire package immediately. “Once you open it up, the clock is ticking,” Burgoyne says. With that said, Burgoyne does offer a few “cheat codes” for extending the life of the product. He suggests that breweries could use C02 to purge oxygen from the bag or transfer it to a keg or other vessel like you would with yeast. The puree should then last three weeks if kept cold or can be frozen for up to four months.

Developing A Recipe With Fruit Purees

In conceptualizing a recipe involving fruit purees, Burgoyne first notes that brewers can use them any way they can imagine. “There’s really no rules anymore,” he says, offering the example of fruited lagers. “You wouldn’t think that you would add fruit to lagers but there are actually a lot of good fruited lagers out there.” He recommends that people consider what styles lend themselves well to fruit and then consider which fruit would match. “Think about how you want the fruit to come through in the final product and what you want to end up with,” he counsels. “Have an idea in your head of how you want the fruit to taste on the back end.”

Companies such as AFP routinely send product samples out to potential customers so they can test the fruits and consider potential recipes. Burgoyne recommends reaching out to the company if interested as the process helps brewers know the fruit they plan to use, which is key. It is also helpful to sample the products as there is some variance year to year due to outside elements such as climate change and growing conditions. “If someone is making a year round beer, they probably want to get an idea of what that fruit is like because you can’t always go with what you used last year this year because raw materials change just like they do with hops and malt,” he says.

Burgoyne also advises brewers to keep dilution in mind. “I think the dilution factor is something to consider first because of how much fruit you’re using and how that’s going to affect your potential alcohol levels,” he says. “You would think that you add a bunch and it ferments out and then you’re gonna have higher alcohol, but that’s not always the case.” He specifically calls out smoothie sour styles as requiring careful consideration to make sure the beer reaches its intended gravity.

When Should It Be Added and How Much?

Burgoyne says the number one question brewers have about using fruit purees is the dosage rate. “We get a lot of questions just about dosage rates,” he laughs. “We have some guidelines on our website. I like to think of them as places to start, not hardened rules. So we generally recommend half a pound, to a pound per gallon, if you’re not fermenting it out. And if you are fermenting it out, probably one and a half to two pounds per gallon. It’s all a little subjective because every fruit is a little bit different. But that is kind of what I always use as a guideline. But it depends on what the beer is, what you’re making, and what your vision is.”

“Really the best way to figure it out is through your own experimentation,” he says. “That’s why we’re happy to send samples out so you can check the quality of the product but also start getting an idea of the strength so you can formulate your recipe to how you want it to finish.”

The second most popular question is when to add the puree. This also depends on the brewer’s intent. At Sweetwater, Burgoyne would add fruit purees during fermentation for seasonals and beers that were going to be canned or bottled. For kegged and in house beers where he wanted to add a little fruit character to back sweeten the beer, he would add the fruit puree post fermentation. “I always typically like to add it kind of similar to dry hopping, at the tail end of fermentation so that you don’t volatize off a lot of your aromas,” he says. “I would always try to add it at the end of fermentation, one or two degrees before you would expect it to finish and that would just stabilize it but also not volatize off your aromas. I always kind of thought of it as treating it like a dry hop, and you want to keep those aromas in along with the flavors.”