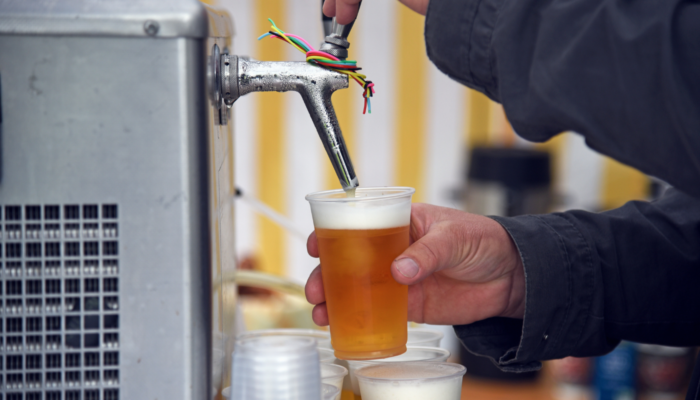 A Cooler Looking Cooler: Dressing up a Jockey Box

The real workhorses of a beer festival are the humble, beaten and scratched ice filled coolers that have been fitted with taps and stuffed with coils and lines to dispense draft beer. Placed atop folding tables, the coolers become part of a brewery’s display and public-facing image. While important, it is an item that often does not look very good.

Enter the jockey box cover, a display designed to fit over a standard 48-quart Igloo cooler, or similar size from a different brand. Breweries have gone to great lengths to dress up a jockey box, outfitting them with elaborate displays or lights, some have built themes around theirs, depicting items associated with the beers or brewery.

The best ones, however, are a balance of form and function and ones that promote a brand, and are easy to carry. Like so many other niche businesses that have been created along with the rise in breweries across the country over the last 40 years, there are specialty jockey box makers across the country.

John Elliott is a master carpenter and the owner of Design Werks in Indiana. He was introduced to the concept of jockey box covers 12 years ago when Monarch Beverage, a distributor, called him and asked him to make 20 covers for their brands to be used at festivals.

After completing the order Elliott saw a niche and turned his attention to making specialty cooler covers (as well as other beer adjacent items like barrel furniture) full time. He estimates that he makes around 150 covers per year. As such he’s learned a few things along the way and offers up advice to breweries wanting to put their best presentation forward.

“Breweries will spend hundreds of dollars on a nice tent, table cloth, flags, banners, you name it,” he says. “And then the thing that serves the beer, the item that is important and got people to visit you is a red or blue cooler that is all scratched and scuffed up. It just takes away from the whole experience.”

He’s designed his jockey box covers to act as a de-facto bar. With a high gloss finish it easily wipes clean from any stray drops or accidental spills, but it creates a communal and familiar transactional surface to pass glasses of beer across, or even bend elbows.

Even for brewers that aren’t serving draft beer, bus tubs filled with cans can fit underneath and can rest in the shade, keeping ice from melting during those summer gatherings. The same is true with coolers, especially if lines leading from keg to cooler are well tucked in, a cover keeps sunlight out of the equation.

Elliott says that all of his box covers are easily assembled, and easy to break down and carried in a bag. He has customers that use the covers during the week in tap rooms as a table display to store stickers, business cards, and other info, adding additional logo visibility to a beer space.

“It’s not just a jockey box cover, it’s a novelty box,” he says.