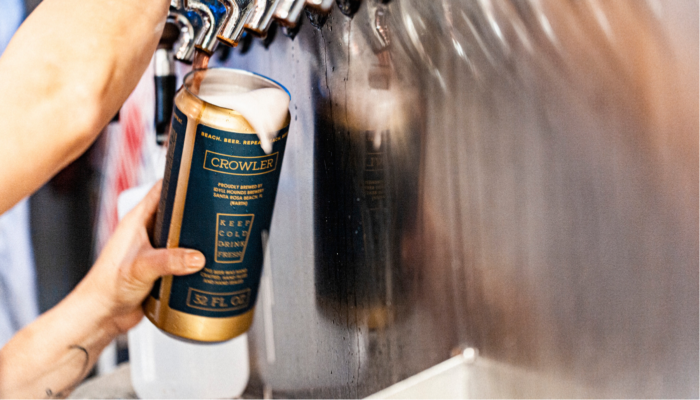 In retrospect, crowlers were inevitable. It’s hard to imagine the decades when glass growlers ruled the take away beer scene. They get wet, drop, and shatter easily. They’re awkward, heavy, and a pain to clean. And you usually have to plunk down some decent money to buy one for each brewery or else your local tap finds itself filling a package with a competitor’s name and logo on it.

In comparison, crowlers are clean, simple, and tidy. They’re cheap, easy to fill, and remain an elegant if ironic throwback solution to the vexing issue of how to best serve beer for take away. We recently chatted with Dennis Grumm, CEO and founder of Oktober LLC, a leading crowler manufacturer, to get his take on the best crowler related practices.

1. Know What You Want Out Of Your Crowlers

“Different breweries pick how they want to act based on what their expectation is for the crowler,” says Grumm. “A lot of a lot of breweries, even bigger and well-known ones, will basically just fill off a tap, put the top on, seal it, and then say enjoy within three or five days on the can, which is fine.” This simple process may work well for less hoppy styles, such as brown ales, but for fresh and dry hopped beers, including IPAs, you need to be concerned about oxidation.

While filling by tap is a quick and easy approach if your customer is going to enjoy the product within a day or two, Grumm recommends that anyone using a crowler filling machine follow three simple rules: “CO2 purge, bottom fill, and then your fill level are the three staples of getting a proper fill and to getting long lasting, good flavor.” He recommends having a nearby CO2 tank set at low pressure or a dedicated draft handle running the gas and then breathing in a little to purge the can of oxygen. As with other more involved canning lines, Grumm recommends using a bottom fill tube, similar to ones used for growlers, to fill the bottom of the can, and then put the cap on foam and run it through the seamer. He recommends filling so there is just a little bit of a headspace. “Typically, if you fill it up to where the cap kind of falls off, that means that there’s less liquid in there,” he says. “But you really don’t want to overfill them because then when you open the tab, it kind of splashes some beer out, which is sort of annoying for the customer.” Grumm tells his customers, “all the same rules for packaging apply to filling crowlers.”

3. Choosing The Right Sized Can

With the ease of using crowler machines, Grumm says of the purchase process “there’s not a whole lot of decisions that go into it outside of the size of can you choose.” He says while the 32 ounce can is the classic size, he also has customers that instead of just doing a crowler, they’ll sell a flight of tiny 8 ounce cans to go.

Following the three rules will help assure customers get the best quality crowler at home. But it’s also possible to age beer in crowlers over a longer term. “We’ve done some Belgian beers that we aged in the can for almost two years,” says Grumm. “It’s a hermetic seal so the aging process is similar to bottled beer.” The benefit versus bottles, however, is “you don’t have to like to worry about light degradation no matter what.”