Anheuser-Busch has added spice to its beer lineup with the first beer in its new draft program, Jack’s Pumpkin Spice Ale.

A-B kicked off the seasonal campaign with Jack’s, and will follow with new beers each quarter. The winter selection has not been determined. 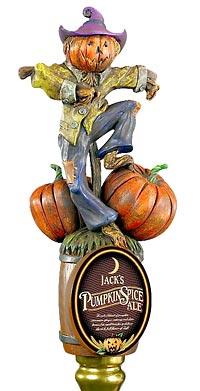 Jack’s proved popular enough in internal testing that A-B decided to include bottles of it in the Michelob Specialty Sampler Collection sold in grocery and convenience stores across the country. Other seasonals likely will remain draft-only products.

Although pumpkin beers are popular sellers for many microbreweries, not all are bottled those that are will not be as widely distributed at Jack’s Pumpkin Spice. It’s easy to spot where the beer is on tap – the handle features a painted figure of a scarecrow with a jack-o’-lantern head.

Jack’s is brewed with real pumpkin, a variety known as Golden Delicious from Oregon, added to the mash along with two-row, carapils and caramunich malts. The beer is hopped with Tettnang and Hallertau and spiced with cinnamon, clover, nutmeg and ginger. It contains 5.5% alcohol by volume.

“It’s a food beer,” said Florian Kuplent, a brewer in charge of new products at A-B, while pouring samples to drinkers at the Great American Beer Festival in Denver. “It goes well with turkey. But it also makes a good dessert beer.”

Pat Hagerman is co-founder of ProBrewer.com. When he's not leading operations for ProBrewer you can find Pat working on Internet of Things (IoT) infrastructure and systems. If you're having a beer with him ask about some of the more original skills he's taught Alexa.