“The top U.S. brewers continue to drive demand, growth, innovation and exponential interest in beers from small and independent brewers,” said Bart Watson, chief economist, Brewers Association. “With a historic record number of breweries in the U.S., the top brewers continue to open new markets and expose beer drinkers to a variety of fuller-flavored styles and offerings.” 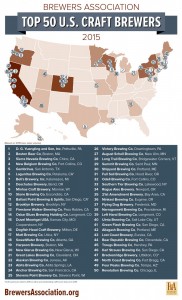