The number of operating breweries in the United States grew 16% in 2017 and smaller breweries generally fared better than large ones. Total beer sales declined 1% for the year, while craft (as defined by the Brewers Association) beer sales grew 5%. Microbreweries, meaning ones that made 15,000 barrels or less, and brewpubs delivered 76% of craft growth.

“Growth for the craft brewing industry is adapting to the new realities of a mature market landscape,” Brewers Association economist Bart Watson said in a press release announcing the 2017 statistics. “Beer lovers are trending toward supporting their local small and independent community craft breweries. At the same time, as distribution channels experience increased competition and challenges, craft brewer performance was more mixed than in recent years, with those relying on the broadest distribution facing the most pressure.” 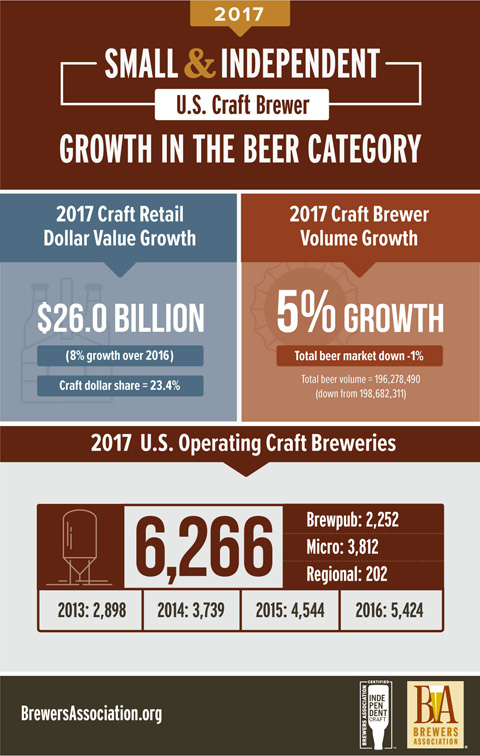 Small and independent breweries account for 98% of the breweries in operation. They exemplify what has become known as “the long tail.” In fact, the smallest 75% of them make less than 1% of the beer.

“Beer lovers want to support businesses that align with their values and are having a positive impact on their local communities and our larger society,” added Watson. “That’s what small and independent craft brewers are all about. The ability to seek beers from small and independent producers matters.”

Craft breweries produced 25.4 million barrels in 2017 and the value of retail sales grew 8% to and estimated $26.0 billion, representing 23.4% market share.

Breweries continue to open at a faster rate than the market is growing, with 997 new operatins in 2017. About 2.6%, or 165, of breweries closed, but Watson warned that number may increase along with growing competition. “It’s hard to know what a long term rate may be,” he said in a conference call.