You are here: Home / Beverage Industry News / Business of Beer / Trivia Time – the Oldest Brewery in Each State

Trivia Time – the Oldest Brewery in Each State

It’s Friday. And a slow news day. So, something a little different. To heck with naming the Capitol of each state. Can you name the oldest brewery in each state?

Pennsylvania’s Yuengling, established in 1829, takes the crown for the oldest brewery in the U.S. That one is easy. How about the youngest state representative on the list? That honor falls to North Dakota’s Fargo Brewing Co., founded in 2010.

And to take it one step further, the folks ay VinePair also tossed in a list of the longest operating brewery in each state.

See the map and lists here. 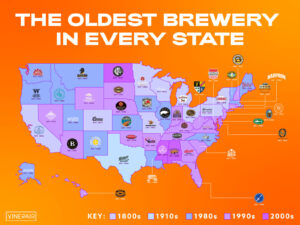