Stone Brewing Company, the nation’s 9th largest independent craft brewery, has rolled out its first national ad campaign. The campaign involves deliberately applying labels to some of its bottled brands to compliment the campaign called ‘Leave No Stone Unturned.’

The nationwide ‘mistake’ was designed to shine light on “all the mistakes made to-date, which allows the company to make the best beer possible. The collective years of trial and error and error and error have ensured that every last detail has been considered from ingredient sourcing and brewing, to distribution and service,” the company said in a press release announcing the campaign. 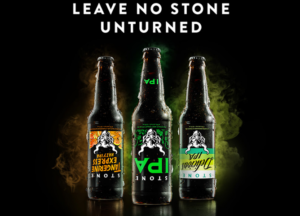 Stone’s first upside-down labels began rolling out nationwide in mid-June with no explanation, intentionally catching fans off guard. Stone has since announced that the labels will remain upturned for the foreseeable future, urging people to “look at Stone from a whole new perspective.”